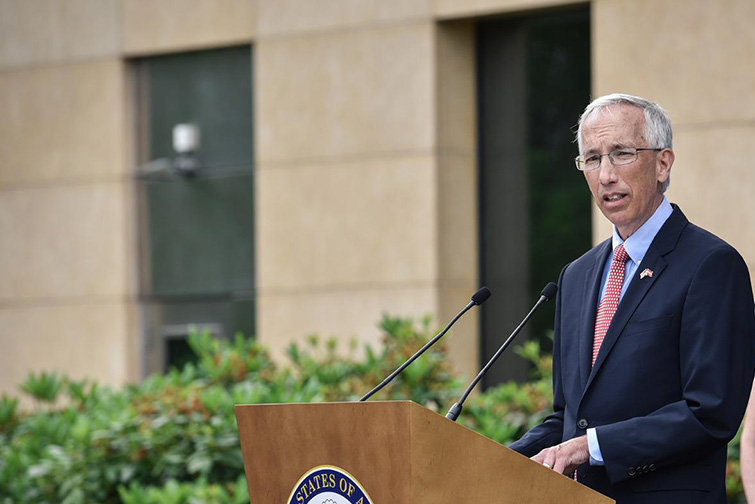 Thirty years ago this week, Chargé d’Affaires Ints Siliņš and a small team of American diplomats set up our new diplomatic mission in room 503 of the Hotel Ridzene, more than half a century after Soviet occupiers forced the closure of the American Legation in Latvia. The United States and many other nations never recognized the Soviet occupation. However, the harsh reality of Moscow’s control meant that for decades, Latvia was isolated from the outside world and subject to the brutality and incompetence of the Soviet system.

By 1991, the occupation had decimated economic, political, and cultural institutions and bred corruption and dysfunction in nearly every sector of life in Latvia. In addition, the Soviets left decaying infrastructure, environmental pollution, and military bases with soldiers. Nonetheless Siliņš—as well as freshly arrived diplomats from many other supportive nations in the West—encountered a people eager to reclaim control of their destiny and establish their place in the alliance of Western democracies committed to preserving personal liberty, economic freedom, and sovereignty.

For the United States and our allies, the mission was clear: to support Latvia as it rebuilt the institutions that would protect the right of the people to choose their government and hold it accountable; to start a business or pursue the profession of their choice; to think and speak and worship and travel as they wish; and to defend their independent nation from outside threats.

Within months, these first American diplomats formally established our embassy at Raina Boulevard 7 and Siliņš became ambassador. The United States began deploying teams of experts and tens of millions of dollars in foreign assistance to help Latvia in a range of areas, from establishing an independent judiciary, to launching healthcare, energy conservation, and environmental protection programs, to financing small businesses and teaching English and entrepreneurial skills. In addition, American military personnel began working with Latvia’s newly formed Zemessardze, and the Michigan National Guard soon initiated a partnership program with them.

As we look back at 1991, Latvia’s progress over the last 30 years has been dramatic. Today, the people of Latvia live freely and securely in an independent nation, with a market economy, and the power to choose their leaders and the direction of the country. They have the right to speak, gather, worship, travel, and pursue their vocation as they wish, and are protected from abuses of power by the state. Latvia secures these freedoms through its capable National Armed Forces and Zemessardze and its hard-earned membership in NATO and the European Union.

The U.S.-Latvia relationship has evolved as well, to one of strategic partnership founded on a shared understanding about the importance of personal liberty, economic freedom, and sovereignty. The United States long ago phased out major foreign assistance programs to Latvia; instead, Latvia now joins us in assisting other nations on a similar journey, such as Ukraine and Georgia. Our militaries are committed to defend each other under NATO’s Article 5, and our soldiers train and conduct missions together. Our diplomats strategize together in international forums, advocating for human rights protections and decrying regimes that oppress their people. Our scientists and educators connect through exchanges and partnerships, such as the Fulbright Program. Our business leaders trade with each other and link our economies through investments and new business ideas.

Looking to the future, our alliance faces new challenges: disinformation, hybrid attacks, transnational corruption, climate change, and social divisions that threaten our stability and security. As we confront these challenges together, we must not forget the lessons of 1991. Our future success will rely on a relentless focus on building and sustaining institutions and practices that deliver liberty, opportunity, and security for our people. These include independent courts that uphold the rule of law, continued investment in our shared defense, and programs and policies that seek to include all our citizens in our civil and economic life.

I am proud of the role that the United States has played in Latvia’s journey over the last 30 years, and the bonds of friendship and common purpose that energized Ambassador Siliņš and his team have only grown stronger with time. I know that our partnership will endure and grow stronger as we work hard to deliver results for our people, and I look forward to standing side-by-side with our Latvian partners as we continue this journey together.