Home Главная страница | News & Events | Ambassador John Carwile’s Remarks at the Celebration of 30th Anniversary of the Reopening of the U.S. Diplomatic Mission to Latvia 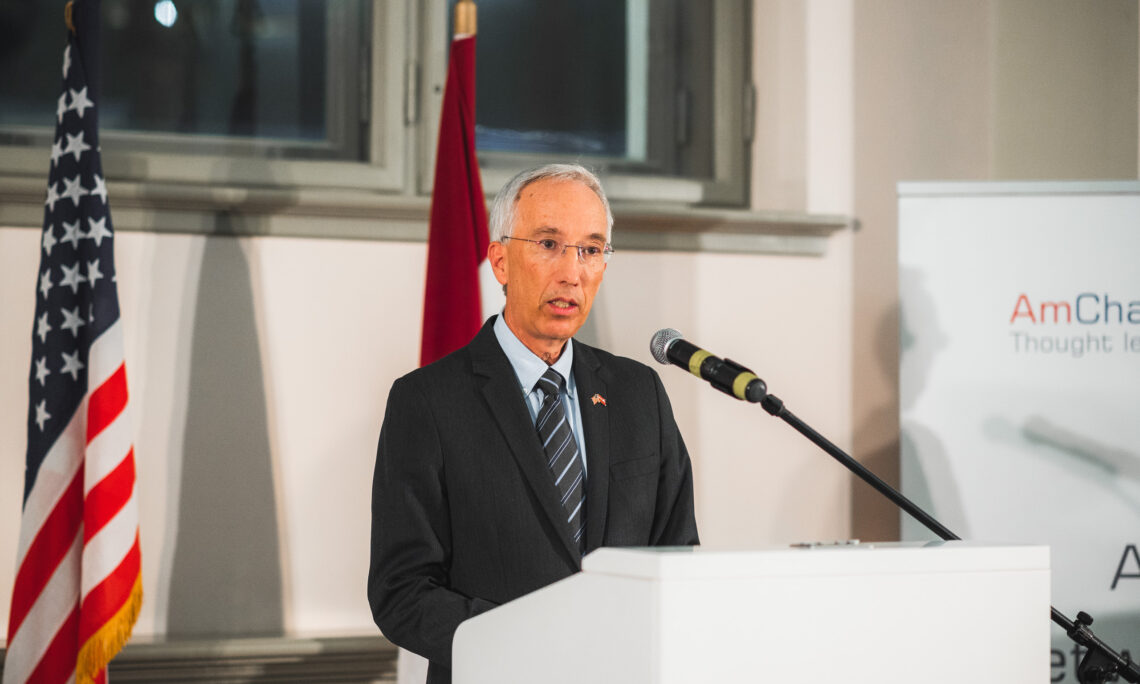 Thank you, Zinta, for your words of friendship, and I thank the American Chamber of Commerce for your enduring partnership—for tonight’s event, and so many others over the years.

We have come a long way since my predecessor Ints Siliņš and a small team of American diplomats set up operations in the Hotel Ridzene on October 2, 1991.

When I read about the history of that era, I am humbled by the challenges confronting the people of Latvia and their courage in facing them. The nightmare of the Soviet occupation had ended, but the occupiers had decimated economic, political, and cultural institutions and bred corruption and dysfunction in nearly every sector of life in the country. Nonetheless Siliņš—as well as freshly arrived diplomats from many other supportive nations in the West—encountered a people eager to reclaim control of their destiny and establish their place in the alliance of Western democracies committed to preserving personal liberty, economic freedom, and sovereignty.

For the United States and our allies, the mission was clear: to support Latvia as it rebuilt the institutions that would protect the right of the people:

Ambassador Siliņš soon established an embassy at Raina Boulevard 7, which served as our home until 2011. And the United States began deploying foreign assistance and teams of experts to help Latvia in a range of areas, including:

As we look back at 1991, Latvia’s progress over the last 30 years has been dramatic. Today the people of Latvia live freely and securely in an independent nation, with a market economy, and the power to choose their leaders and the direction of the country. They have the right to speak, gather, worship, travel, and pursue their vocation as they wish, and are protected from abuses of power by the state. Latvia secures these freedoms through its capable National Armed Forces and Zemessardze and its hard-earned membership in NATO and the European Union.

The U.S.-Latvia relationship has evolved as well: we are strategic partners, with a shared understanding about the importance of personal liberty, economic freedom, and sovereignty.

I am proud of the role that the United States played in Latvia’s journey over the last 30 years. And I am pleased that we have with us tonight some of the people who were critical to that journey: leaders in the movement to rebuild political systems, establish an independent press, and build and invest in new businesses, including some of the earliest AmCham members. We are also joined by some of the Embassy employees from those early days, who were so important to our diplomacy in that critical period.

The bonds of friendship and common purpose that energized Ambassador Siliņš and his team have only grown stronger over the years.

However, this evening is not simply about nostalgia for the achievements of the past. Looking to the future, our alliance faces new challenges: disinformation; hybrid attacks; transnational corruption; climate change; and social divisions that threaten our stability and security.
As we confront these challenges together, we must not forget the lessons of 1991. Our success depends on a relentless focus on building and sustaining institutions and practices that deliver liberty, opportunity, and security for our people.

All of us must remain vigilant, and I offer a special acknowledgment to the youth leaders from civil society and from political parties that we invited tonight. Your understanding of this history, and your leadership in the years ahead, will be critical to maintaining and strengthening what we have built as allies.

I know that our partnership will endure and grow stronger as we stay focused on the hard work of delivering results for our people, and I look forward to standing side by side with our Latvian partners as we continue this journey together. And now I would like to introduce the Head of the Chancery, a former Ambassador to the United States, and the mayor of Riga when the Soviet occupation ended, my friend Andris Teikmanis.