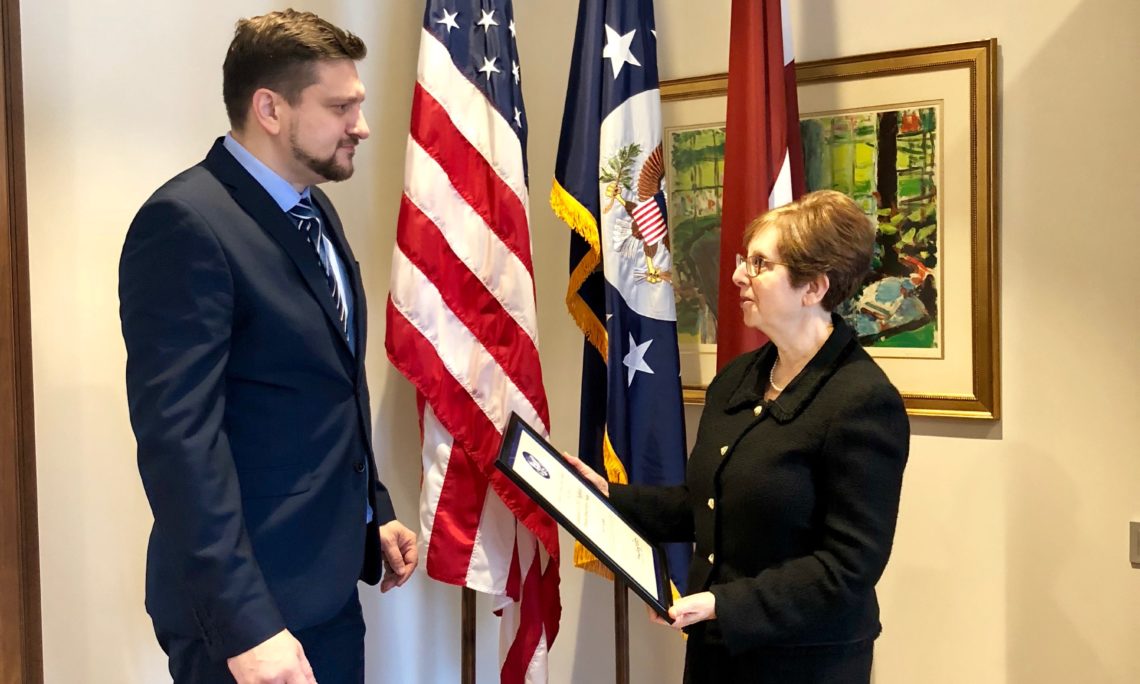 Today, on October 25, U.S. Ambassador to Latvia Nancy Bikoff Pettit presented a certificate of appreciation to Mr. Andris Bidzans, Chief Inspector of the Latvian State Police, in honor of his nomination for the 2018 Trafficking in Persons Report Hero Award.

The ambassador hosted a lunch in honor of Latvians whose efforts have combatted Trafficking in Persons in the region. During the lunch, Ambassador Pettit presented a certificate of appreciation to Mr. Bidzans. The U.S. Embassy nominated Mr. Bidzans based on his efforts that led to the large-scale investigation of a recent labor trafficking case.

As U.S. Secretary of State Mike Pompeo said earlier this year, “At the State Department, we are committed to partnering with a broad range of stakeholders so that together, we may better prevent the crime from occurring, hold traffickers to account, and assist survivors of trafficking through a victim-centered and trauma-informed approach.” Thanks to the efforts of Latvians like Mr. Bidzans, whose dedication, professionalism, and service is an example to us all of “rolling up our sleeves and working together to break the bonds of modern slavery.”

Latvian State Secretary of the Ministry of the Interior, Dimitrijs Trofimovs, expressed his gratitude to Latvia’s anti-trafficking community for its efforts to prevent human trafficking. He encouraged all stakeholders to continue their efforts to address this grave violation of human rights. Trofimovs acknowledged that a culture of impunity exists in our society, but that State Police work to disrupt trafficking chains and counteract human trafficking crimes both in Latvia and internationally is working to counteract this impunity. Trofimovs expressed his appreciation to Andris Bidzans whose tireless counter-trafficking work has resulted in successful cross-border investigations and international cooperation in joint investigation teams, which is considered a best practice in Latvia, and is shared with other countries to strengthen law enforcement capacity.

Each year, the U.S. State Department honors people from all over the world who have devoted their lives to the fight against human trafficking. They are honored for their continued efforts to protect the victims, punish offenders, and raise awareness of ongoing criminal acts both in their own countries and abroad.