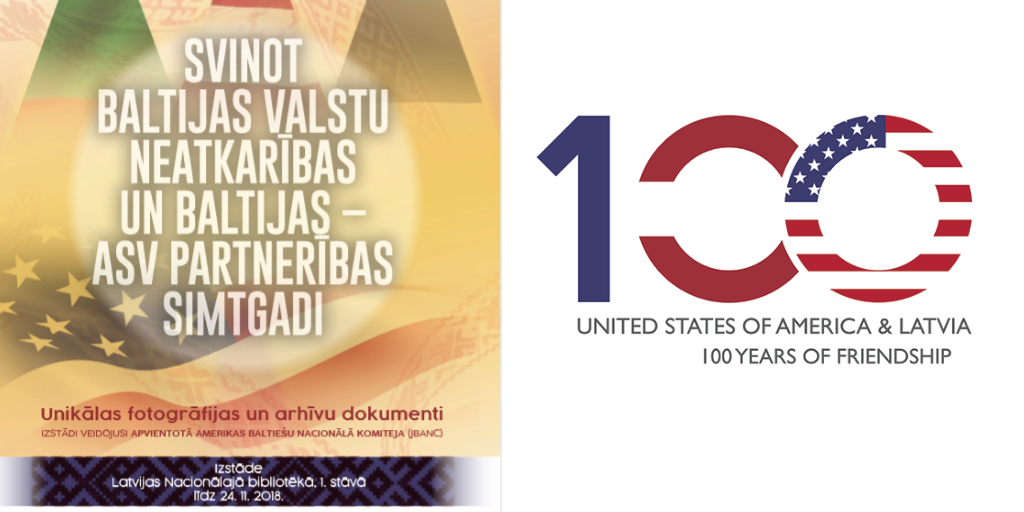 Riga, November 1, 2018 – The United States Embassy in Latvia is pleased to announce the opening of an exhibit titled “Celebrating the Centennials of Baltic Independence and U.S.-Baltic Relations.” The exhibit will be displayed at the National Library of Latvia’s atrium (Mūkusalas street 3, 1st floor) on November 1. The exhibit will be open to the public until November 24.

This exhibit recognizes the history of diplomatic relations between the United States and the Baltic nations of Estonia, Latvia, and Lithuania. The exhibit was created earlier this year by the Joint Baltic American National Committee and its parent organizations – the Estonian American National Council (EANC), American Latvian Association (ALA), and Lithuanian American Council (LAC) – at the invitation of the U.S. Department of State and was initially displayed during June in the U.S. Diplomacy Center in Washington DC. The exhibit covers three major periods in Baltic history, provides an overview of the development of diplomatic relations between the US and the Baltic states, and recognizes the active role of the Baltic nations in today’s world.

“As we celebrate Latvia’s centennial, I hope that people come to the National Library, the Castle of Light, and spend a quiet moment at the exhibition reflecting on the past 100 years,” said U.S. Ambassador Nancy Bikoff Pettit. “Through the Great Depression, world wars, and occupation, our transatlantic commitment to each other has not wavered. The Welles Declaration was a powerful and symbolic example of that commitment. As we celebrate 100 years of friendship, I look forward to the United States and Latvia continuing to stand together as allies, partners, and friends to strengthen our common values, security interests, and shared vision for the future.”