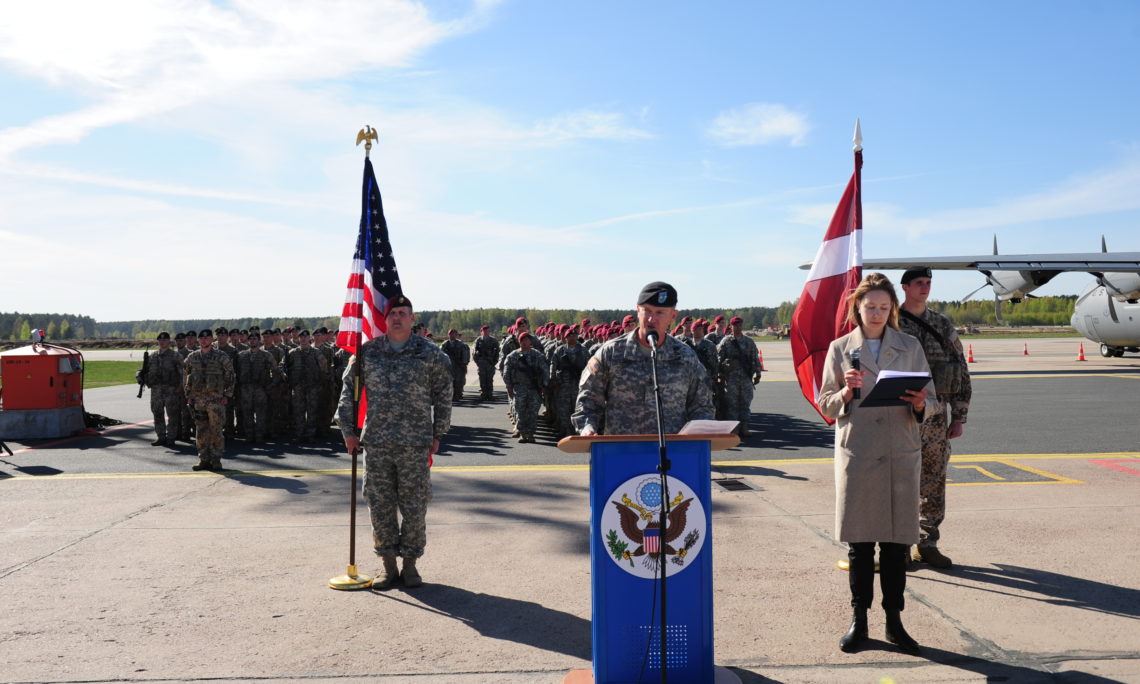 The North Atlantic Treaty Organization (NATO) is the most successful alliance in history. Over the past 70 years, NATO has helped to create the most secure, stable, and prosperous period in its members’ history. From deterring the Soviet Union during the Cold War to countering the hybrid threats that confront us today, NATO Allies stand shoulder-to-shoulder in protecting our people.

Since joining the NATO Alliance in 2004, Latvia demonstrates its commitment through actions by meeting its two percent defense spending commitment and hosting one of NATO’s enhanced Forward Presence (eFP) battle groups with troops from nine different countries. Latvia is also home to the NATO Stratcom Center of Excellence. Latvia is an Ally in every sense of the word, from fighting enemy troops together with us in Afghanistan, to countering Russian disinformation and hybrid warfare closer to home.

NATO’s strength is in its unity and in staying true to the principles and purposes for which it was created. Our commitment to the collective defense of all NATO member states is unwavering, as is our commitment to shared values of democracy, individual liberty, human rights, and rule of law.

When the NATO Treaty was signed on April 4, 1949, by the original twelve Allies, President Truman said its members were “not only seeking to establish freedom from aggression and from the use of force in the North Atlantic community, but we are also actively striving to promote and preserve peace throughout the world.” That remains the collective aspiration of the members of the NATO Alliance.
NATO played an historic role in keeping the peace, and it provides that same security today as the Alliance meets new threats.

For decades, NATO Allies stopped the expansion of Communist dictatorships in Europe and ensured that the kinds of horrors we saw in World War II would never again strike our nations. After the Cold War, the Alliance adapted to new circumstances, establishing partnerships with former Cold War adversaries and responding to conflict in the Balkans.

Still more recently, NATO has turned to face the threat of terrorism. When the United States was attacked on September 11, 2001, NATO invoked Article 5 – NATO’s collective defense clause – for the first and only time in its history. NATO Allied planes patrolled American skies and Allies fought side by side to counter terrorism in Afghanistan. Today Allies are countering terrorism and also working together to build our resilience to and counter the hybrid and cyber threats that menace our societies.

The Cold War is over, but NATO remains as relevant today as it was in 1949, as new challenges combine with old ones to create an increasingly competitive and uncertain geopolitical environment. Instead of working with us to address new challenges, Russia is demonstrating aggression that once again threatens to erode the prosperity, stability, and peace we have built over the last 70 years. Russia remains the greatest threat to the sovereignty and independence of individual European nation-states, and to the shared values that bind the West together.

Russia under Vladimir Putin has targeted our democratic institutions, including elections, financial institutions, and civilian infrastructure, with new forms of “hybrid warfare.” It has used malicious cyber activities to target international organizations like the World Anti-Doping Agency and the Organization for the Prevention of Chemical Weapons. Kremlin-backed assassins used a military-grade nerve agent on British soil in an attack that ultimately killed a UK citizen. Russia has invaded and continues to occupy parts of the sovereign nations of Ukraine and Georgia, and it threatens NATO cities and our citizens by fielding and deploying nuclear-capable missile battalions in violation of the Intermediate-Range Nuclear Forces (INF) Treaty.

Russia is not the only international threat NATO members face. An increasingly assertive China is aggressively seeking to build economic and political influence in Europe in order to subvert European and transatlantic unity and to rewrite international norms and standards. We also cannot ignore the challenges posed by nations like Iran and North Korea, both of which have unpredictable leaders and nuclear ambitions. And, as Allies have said, terrorism continues to pose a direct threat to our populations, and to international stability and prosperity broadly.

In the face of these challenges, the United States remains steadfast in its commitment to our Allies. When President Trump spoke in Warsaw in 2017, he declared unequivocally, “Americans know that a strong Alliance of free, sovereign, and independent nations is the best defense for our freedoms and for our interests.”
That commitment to the collective defense of our shared values and NATO member states’ sovereignty is why Allies decided in 2014 to increase investments in our national defense. We committed to spend at least two percent of GDP on defense and to invest at least 20 percent of that spending on major equipment by 2024.

As we increase national defense investments, together we will help NATO ensure our armies, navies, and air forces are trained, equipped, and postured ready to go when called upon in crisis or in conflict, against any threat. We will strengthen NATO’s ability to address hybrid threats. We will also ensure NATO can marshal its resources to support our partners to fight terrorism, build stability in crisis-prone areas, and reduce the likelihood of terrorist attacks on Allied territory.

NATO is an alliance of nations that have banded together because, in the words of the NATO charter, “they are determined to safeguard the freedom, common heritage and civilization of their peoples, founded on the principles of democracy, individual liberty and the rule of law.” Since its founding, NATO has stayed true to its founding ideals and our door has remained open to new members who share our values and are committed to contributing to our collective defense. Each new Ally makes us stronger, and the growth in NATO’s collective defense capabilities empowers NATO members to better defend themselves and their allies, safeguarding our peace and prosperity. In 2019, NATO marks the anniversaries of new Allies joining from across Central and Eastern Europe, while preparing to welcome North Macedonia to become NATO’s 30th Ally. Latvia will mark 15 years since joining NATO this year – a remarkable accomplishment for a country that less than 28 years ago was still under the yoke of Soviet occupation.

NATO Allies are committed to our collective defense and the preservation of our freedoms. Together, we must continue to invest in national defense, grow and modernize our military capabilities, and contribute to NATO’s efforts to promote the safety and security of our citizens. NATO Allies are stepping up. Together, we will be stronger and better equipped to ensure NATO remains the safeguard of peace and prosperity for another 70 years – and beyond.