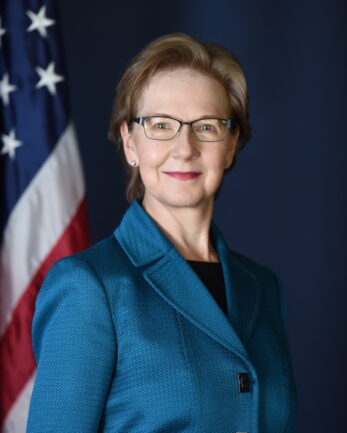 Ruta Elvikis has been the Deputy Chief of Mission to U.S. Embassy Riga since August 2020. Prior to her assignment to Latvia, Ruta spent five years dealing with Russia issues: three years in Moscow as Deputy Consul General followed by two years as Deputy Director of the Office of Russian Affairs.  She has also served at the U.S. Consulate General in Guayaquil, Ecuador and the U.S. Embassies in Zagreb, Vilnius, and Canberra, as well as in the Consular Affairs Bureau’s Office of Children’s Issues and the Bureau of Intelligence and Research.  She is a career member of the Senior Foreign Service with the rank of Counselor.

Before joining the Foreign Service in 1993, Ruta practiced law in Palo Alto, California. She speaks Latvian and Lithuanian, as well as some Russian and Spanish.  She has also studied Croatian, Polish, and French.  She was born and raised in the Chicago area and is the mother of a teenage son.