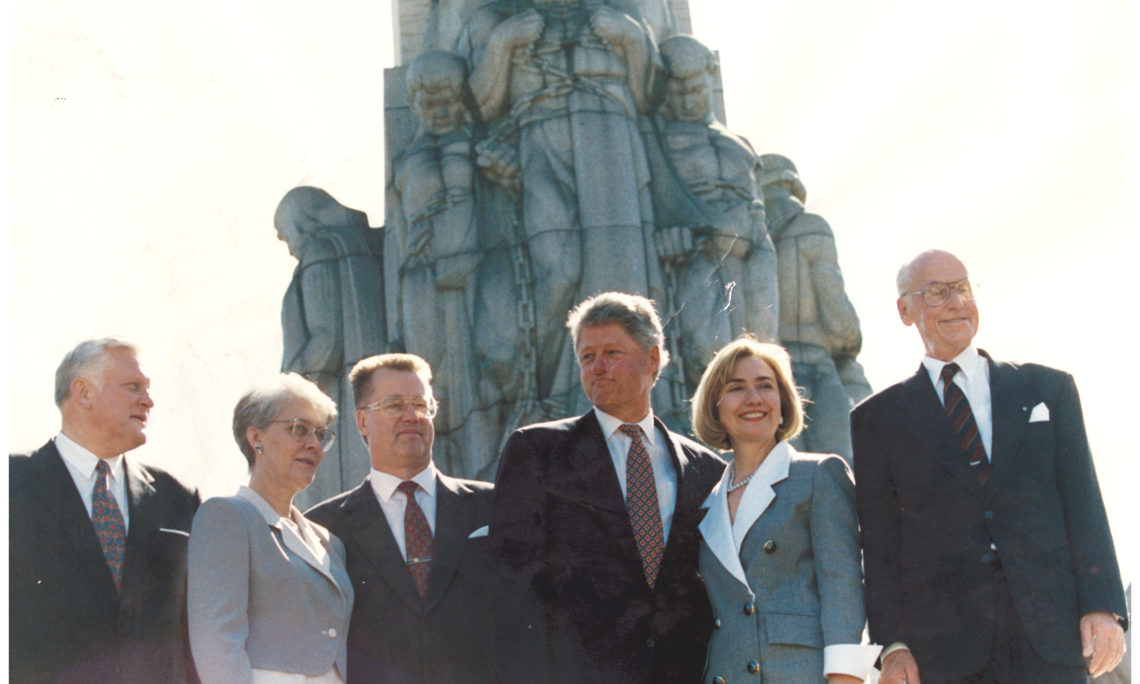 President Clinton with presidents of the Baltic States in Riga, July 6, 1994

The United States of America recognized the Republic of Latvia de iure on July 28, 1922, and on November 13 the first envoy of the USA to Latvia, Frederick W.B.Coleman, submitted the Letter of Credence to the President of Latvia, Jānis Čakste. In his address on this occasion, the President gave a highly positive evaluation of the activities of the American Relief Organization and American non-governmental organizations in their support of Latvia between 1919 and 1922: “Latvia is happy to welcome the first official democratic representative of the great and renowned American democracy; the democracy which was the first to lend a helping hand to the unfortunate inhabitants of Latvia, victims of the World War (Government Journal, November 15, 1922).

The interwar period consolidated the diplomatic relations between the two countries, and several bilateral agreements were signed. Despite the Great Depression of 1929 and the considerable geographical distance, economic, trade, and culture relations were established.

When in June of 1940 the Baltic States were occupied and annexed, the U.S. government came forward on July 23 with a Statement of the US Undersecretary of State, Sumner Welles, condemning the annihilation of the political and territorial integrity of Estonia, Latvia, and Lithuania. In July, 2000 a resolution of the U.S. Congress reiterated and reinforced this statement once again.

The Statement of July 23 determined U.S. policy with regard to the Baltic States and ensured the preservation of diplomatic representations of these countries in the USA for fifty years. During the years of occupation the Embassy of Latvia in Washington, DC enjoyed full diplomatic recognition which provided opportunities to remind the world continually of the judicial existence of Latvia and defend the interests of Latvia and its citizens.

After the restoration of independence in Latvia in August of 1991, President George H.W. Bush announced the U.S. Recognition of Latvian Independence from the USSR on September 2th, 1991 and the U.S. resumed full normal Latvian-U.S. Relations.

On January 16, 1998 the Presidents of the United States of America and the Baltic States signed the Charter of Partnership that laid a solid foundation for the development of U.S.-Latvia relations.

In September 2011, with the Thunderbirds fly-over Daugava, the United States launched the first of many events to celebrate the 20th Anniversary of the full restoration of U.S.-Latvian Diplomatic Relations. With this fly-over the U.S. wanted to congratulate also the Latvian Air Force, which celebrated its 20th Anniversary this year, as well.

Celebrating the 20th anniversary of the full restoration of U.S.-Latvian Diplomatic relations, the U.S. Embassy organized a list of events that included the official dedication ceremony of the new Embassy that underscored our close ties, a celebration of 20 years of U.S.-Latvian business ties, a celebration of the 20th anniversary of the Fulbright program, a photo exhibition of Latvian-U.S. relations and other events.