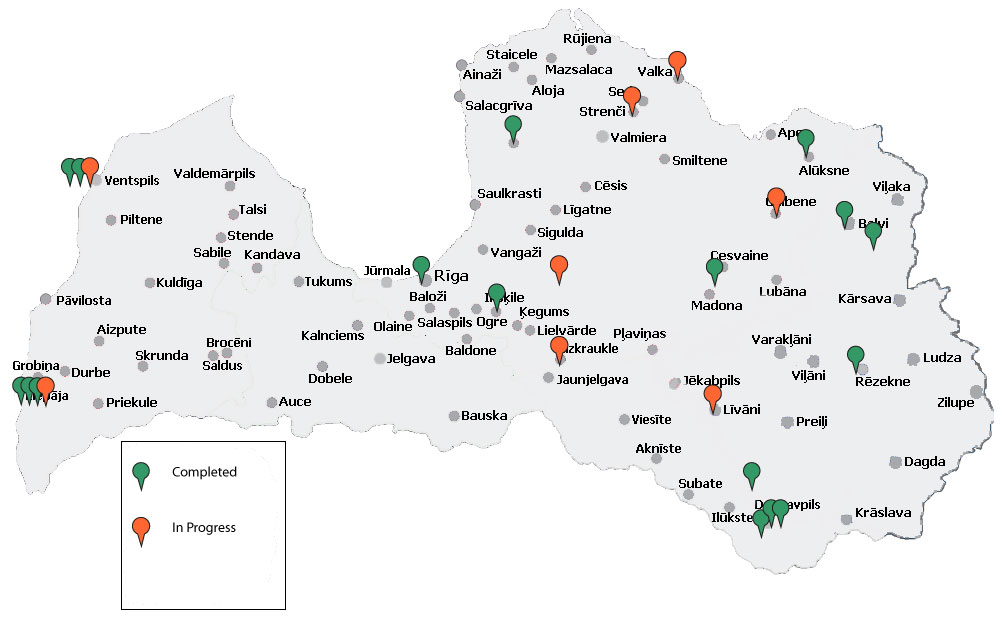 In 2013, the U.S. European Command’s CE Program funded 52 projects in 17 different countries with a total value of $11.1M.These projects included kindergarten and fire station renovations in Moldova, construction of an amputee care coordination center in Estonia, construction of daycare center for children with disabilities in Serbia, and other similar projects.
In 2009, ODC Latvia in cooperation with the State Fire and Rescue Service (SFRS) began planning reconstruction projects at SFRS’s fire stations throughout Latvia. Ten projects (in Madona, Limbaži, Valka, Strenči, Gulbene, Ķeipene, Līvāni, Aizkraukle, Liepāja and Ventspils) that were begun in 2009-2010 have now been completed, while several more fire station renovation projects are waiting to be approved and funded.

In addition to its work with the Latvian State Fire and Rescue Service, ODC Latvia is coordinating several reconstruction projects with the State Emergency Medical Service (SEMS). In 2010, SEMS nominated three renovation projects, including two dispatch centers in Riga, and one dispatch center in Kuldīga. The work has been finished at Kuldīga Hospital, where U.S. EUCOM and the U.S. Embassy in Latvia, in cooperation with the SEMS and Kuldiga Hospital are reconstructing a previously unused section of the Kuldīga Hospital that will house the Kurzeme Regional Management and Dispatch Center. U.S. EUCOM has provided approximately $991,000 in funding for the project, as part of its CE Program. Additionally, a contract has been signed for reconstruction of SEMS’s Brigade Support Center “Krasts” in Rīga. The project includes a complete interior renovation, replacement of windows and doors, and construction of a new garage for ambulance vehicles. The total value of this project is approximately $686,000. Additionally, in August 2014, a new contract was signed for construction of ambulance car maintenance bay for SEMS’s Riga Management and Dispatch Center on Duntes Street in Riga. Total value of the project is approximately $230,000.00.

ODC Latvia works closely with Latvian government agencies that identify and submit projects for the CE Program. Proposed projects are then submitted to U.S. European Command for approval. Once approved, ODC Latvia works with the U.S. Army Corps of Engineers (USACE) and local contractors to ensure that the work is completed in accordance with the requirements of the supported government agency. These projects demonstrate the close cooperation between the U.S. and Latvian governments and bring the benefits of this relationship to the citizens of Latvia.