In the 20 years since the formal restoration of Latvian-U.S. relations, the two countries have continued to consolidate their political, economic, trade and cultural relations, building on the foundations laid during the 1920s and preserved throughout the Cold War years. The process of NATO expansion that led to Latvia’s accession to NATO in 2004 has brought the two countries even closer together by adding a new dimension to Latvian-U.S. relations. 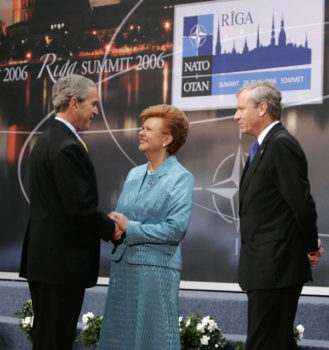 Latvia has also become fully involved in the NATO decision making and consulting process that provides the representation of Latvia’s interests in NATO structures, as well as participation in the decision making process in NATO Committees and Agencies. To ensure that Latvia’s interests are fully met, representatives from the Ministry of Defense and the Ministry of Foreign Affairs, the Latvian National Armed Forces and other institutions are employed in NATO.