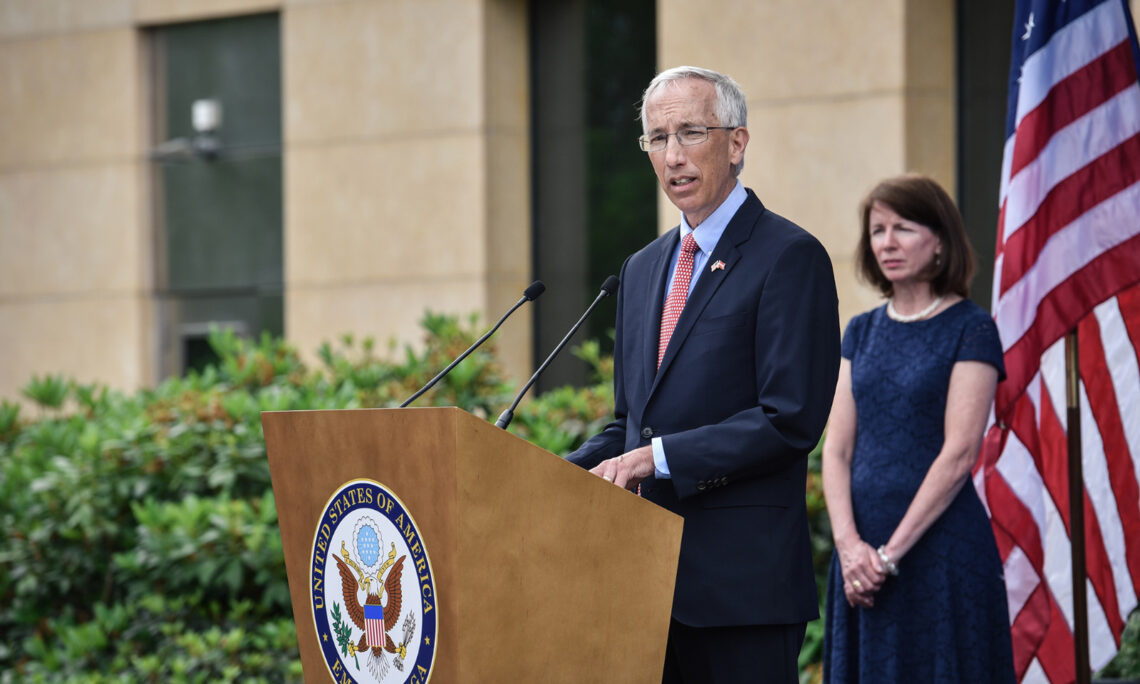 Good afternoon ministers and excellences, distinguished guests, ladies and gentlemen. Welcome to the United States Embassy’s celebration of America’s 244th Independence Day. This has been an unusual year – and we still have another six months to go. When our team discussed whether to hold a reception this summer – in this case, two smaller events – and decided it was important to remember what America stands for; to comment on our ideals; and to reiterate our commitment to our friend and ally, Latvia.

The fact that we are even able to gather here is a testament to Latvia’s early response to the coronavirus pandemic. Many thanks to the Prime Minister, his government, and the people of Latvia for creating a safe environment. I also want to thank all of you for coming today, as well as the generosity of our sponsors for their contributions to this event.

While the number of our guests is smaller this year, our national day is an opportunity to remember the American revolutionaries who fought an eight-year war against a global empire and inspired millions throughout the world. Our revolution – even then – reflected traits that characterize Americans, including a belief in independence, individual responsibility, and limited governance. It also promoted the idea – if not always followed by deed – that all people are created equal and that they have the right to life, liberty, and the pursuit of happiness – as proclaimed in our declaration of independence.

A great strength of the United States is that we believe that people around the world should enjoy these same rights – and be free to govern themselves. In three weeks, on July 23, this conviction will be reinforced as we mark the eightieth anniversary of the Sumner Welles Declaration. On that date in 1940, acting U.S. Secretary of State Sumner Welles condemned the Soviet occupation of the Baltics and expressed America’s sympathy and support for the people of the Baltic States. The Welles Declaration was the foundation of the United States’ non-recognition policy of Soviet occupation in the Baltics — and it also became the foundation of our bilateral partnership with Latvia. Today, we gather on the street that bears Sumner Welles’ name.

Since the Welles Declaration was issued in 1940, the ties between the United States and Latvia have endured and strengthened – even as Latvia suffered under brutal Nazi and Soviet occupations. When Latvia regained full independence from the Soviet Union, we continued to stand with our Latvian friends and they stood with us. We have been united in a commitment to democracy and universal rights. Our soldiers have served together throughout the world, and fought side-by-side; our businesses have opened and grown in each other’s countries; and our family ties have remained close and strong.

As we celebrate special anniversaries like the Welles declaration, we also confront new challenges in 2020. Who thought that a virus would upend the world in six months? This global pandemic has changed the way we live, work, and engage with each other. It has devastated lives and economies.

But the pandemic has also brought out the best in us. Despite some imperfect or politically charged responses, the world is confronting the pandemic with resilience, commitment, and cooperation. We have renewed appreciation for first responders, doctors, nurses, and medical care providers – and owe them a tremendous debt of gratitude. Until a vaccine is developed, we must continue to remain vigilant, compassionate, and make decisions based on science.

Traditionally, an ambassador’s Independence Day speech steers away from events in the United States. However, the ongoing protests there need to be recognized and acknowledged. Sixty-five years ago this December, Rosa Parks’ arrest for sitting in the front of a bus in Montgomery, Alabama helped spark a wave of civil rights protests and change. Now, again, Americans are seeking equal justice and to ensure that black lives matter.

We all hope that the protests in the United States and now elsewhere in the world will inspire real action against racism, against injustice, against anything that separates people into “us” versus “them.” We must stand together to represent the best of ourselves to make our communities, countries, and the world better places.

As Americans celebrate the U.S. Independence Day, we reflect on both our great achievements – and I believe the United States is a tremendous force for good in the world – and what remains undone. Americans continually strive towards a more perfect union. “Life, liberty, and the pursuit of happiness” are the standard that we expect of ourselves and the rest of the world. This is what the United States – at its core – both represents and aspires to.

I am extremely proud to serve as U.S. Ambassador to Latvia. I am proud to be part of Sumner Welles’ legacy and of the enduring friendship and partnership between our countries. I am proud to work and live in a country that has overcome so much adversity – from the fight for independence to occupations, and even global pandemics. As we respond to the challenges facing us today, may we do so together, unified as friends and partners.