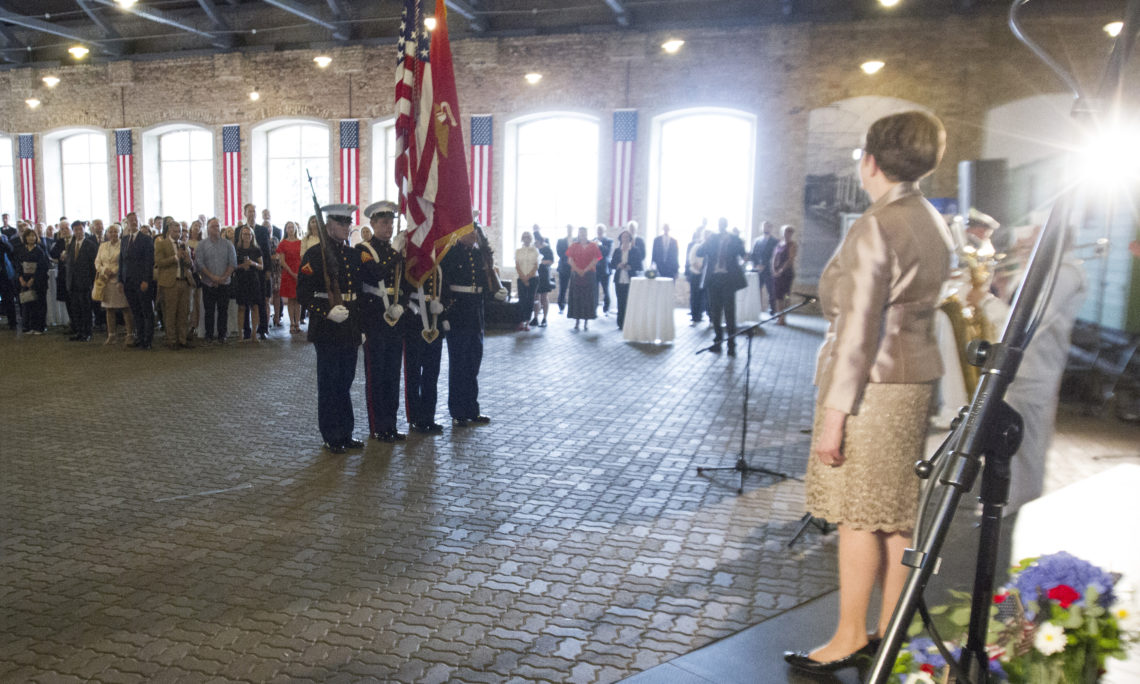 Good afternoon ministers and excellencies, distinguished guests, ladies and gentlemen. Welcome to the United States Embassy’s celebration of America’s 243rd Independence Day. We are honored by your presence here today. In the hourglass of history, 243 years may seem like a brief moment in time, but as we commemorate this historic anniversary of our independence, I am reminded of the many successes, accomplishments, victories, and even tragedies that our nation has experienced in those 243 years and how far we have come as a nation.

Our July Fourth national day provides an opportunity for Americans to honor the legacy of those who sacrificed for our independence and those who today continue to preserve it.

My special thanks to our American military members and veterans here today, as well as the Latvian military service members and other NATO Allies in attendance. Thank you.

Anniversaries like this are an opportunity to pause and reflect on the past, and look to the future with renewed hope and conviction. Last year’s centennial of Latvia’s independence was an extraordinary event and the first of many significant anniversaries that will continue throughout 2019.
I have witnessed a number of historic events during my nearly 40-year career in the State Department, including the fall of communism and the collapse of the Soviet Union.

This November will mark 30 years since the Berlin Wall came down and people throughout Central and Eastern Europe emerged from the shadows cast by the Iron Curtain. It is remarkable to consider that right here in Latvia, in less than 30 years, you have regained your independence from Soviet occupation, joined the European Union and NATO, and acceded to the OECD. In 1989, such achievements would have seemed impossible, but they are realities today.

Next month, on July 20, we will commemorate a feat that seemed impossible to Americans and many others throughout the world. Only 50 years ago, Neil Armstrong set foot on the moon and declared it was “one giant leap for mankind.”
President John F. Kennedy summed it up best when he said: “We choose to go to the moon. We choose to go to the moon in this decade and do the other things, not because they are easy, but because they are hard.” That one small step for man proved that the impossible can be possible.

When more than two million people joined hands across Estonia, Latvia, and Lithuania 30 years ago in August, they proved to the world that nothing is impossible. The Baltic Way has come to symbolize the heart and determination of Latvians, Estonians, and Lithuanians. The Washington Post reported on the Baltic Way in 1989 just days after the event and said that the Latvians used “moral pressure and serene defiance” to push for independence.

The newspaper also drew comparisons between the Baltic Way and similar, peaceful methods used by Martin Luther King Jr. during the civil rights movement and by Mahatma Gandhi’s independence movement in the 1940s. The Washington Post report included the statement of an Estonian leader who said the Baltic Way was done, “so our children can be free.” In 1989, they organized a human chain spanning three countries, not because it was easy, but because it was hard. Thirty years later we honor that historic event that set in motion freedom for their children.
In 1940, Acting U.S. Secretary of State Sumner Welles drafted a statement condemning the Soviet occupation and expressing sympathy for the people of the Baltic States.. However, Welles wanted more than just a statement, he wanted the foundation of U.S. policy towards the Baltic nations.

He consulted with President Roosevelt, strengthened the statement, and issued what would become known as the Welles Declaration, essentially the United States’ non-recognition policy of Soviet occupation in the Baltics. The New York Times described the declaration as one of the most exceptional diplomatic documents ever issued by the Department of State. The declaration solidified the bond between the United States and Latvia. Welles took a powerful stance that became the foundation of U.S. policy towards Soviet aggression, not because it was easy, but because it was hard.

Four years ago, when I arrived in Latvia, I could not have imagined the accomplishments that have been achieved between our two great nations. Today, there are nine countries serving as part of the NATO Enhanced Forward Presence.
U.S. troops continue to support Latvia through persistent rotational deployments, including our Blackhawk helicopters at Lielvarde. Last year, the Latvian Armed Forces and the Michigan National Guard celebrated 25 years of one of the most successful state military partnerships in the world. Latvia also became one of eight NATO Allies honoring its commitment to contribute two percent of GDP to defense and stands as a model for other NATO countries. Also last year, President Vejonis visited President Trump at the White House for a special centennial Baltic Summit. Latvia hosted the U.S. Vice President in Riga in 2016. Numerous Congressional delegations and senior military leaders have visited Latvia to strengthen our ties and reaffirm our commitment to Latvia’s independence.

Today, Latvia is also taking steps to shed Soviet legacy corruption issues, including reforms to combat money laundering and strengthen the judicial and law enforcement sectors. I applaud the new government’s actions to tackle these important issues. They are taking these measures, not because they are easy, but because they are hard.

As I prepare to depart Latvia in a few weeks, my heart is full of gratitude for the friendships, partnerships, and the wonderful people I have worked with over these four years. In particular, I’d like to thank current Deputy Chief of Mission, Paul Poletes and former Deputy Chief of Mission, Sharon Hudson-Dean, for their hard work, advice, professionalism, and grace under pressure.

I’d also like to thank my family and friends, particularly my husband Jim, who have accepted and endured years of separation to allow me to serve my great country as U.S. Ambassador to Latvia. When I depart Latvia July 14, I will leave knowing I did everything possible to strengthen our bilateral relationship, even though my messages were sometimes tough and not always well-received by some Latvians.

The fact is, the relationship between the United States and Latvia has never been stronger. We will continue to work together and show the world that the impossible is possible. In August, as we join hands to honor the Baltic Way anniversary, let us remember and appreciate how far we have come as nations. Let us honor those from yesterday and today who do the right things, not because they are easy, but because they are hard.