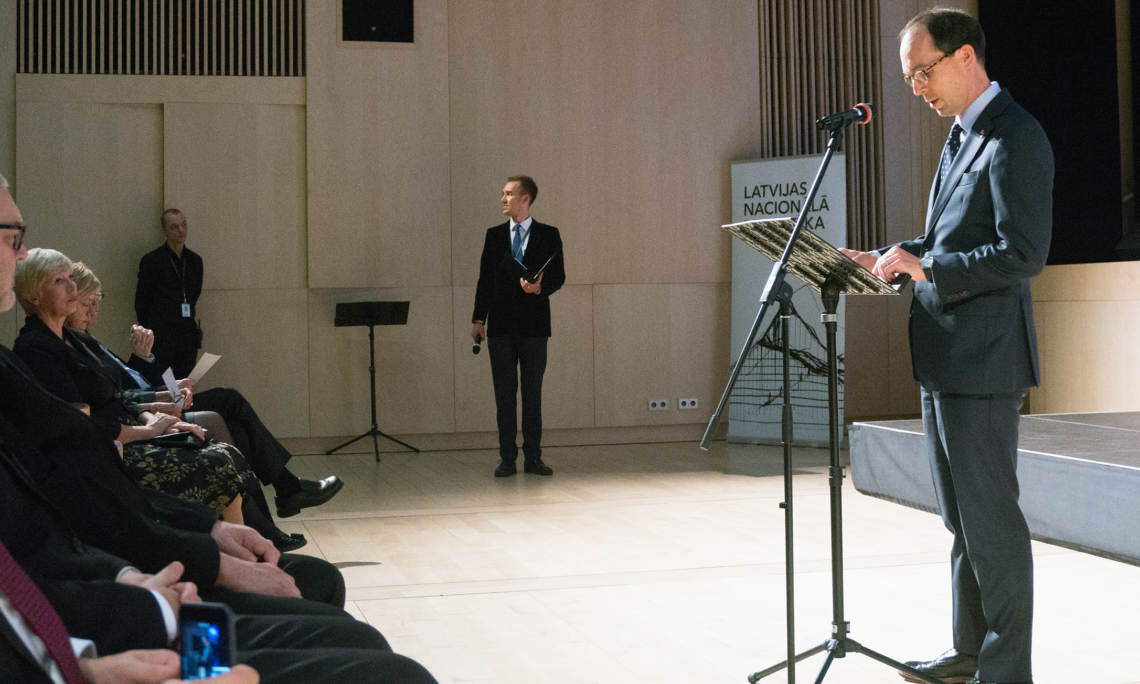 I would like to thank National Library Director Andris Vilks for extending the privilege of speaking at this special event today as we celebrate the life and achievements of Gunnars Birkerts.

It is an honor to commemorate Mr. Birkerts, who so nobly represented the very best of our great countries. He was a Latvian-American who distinguished himself as an important architect both in the United States and in his native Latvia. Mr. Birkerts was born and raised in Latvia, but immigrated to America as a young man in 1949, after escaping the Soviet advance into the Baltic States.

Residing in Detroit, Michigan, Birkerts’ many famous works in the United States include the Federal Reserve Bank in Minneapolis, the Corning Glass Museum in New York, the Contemporary Arts Museum in Houston, the University of Iowa College of Law, and the Duluth Public Library in Minnesota. Birkerts’ work has a particularly special place in the hearts of many American diplomats, as he designed the U.S. Embassy in Caracas, Venezuela.

In addition to his legacy in architecture, Mr. Birkerts was equally dedicated to education and inspired a generation of aspiring American architectural students as he served as faculty at the University of Michigan for over four decades. He left an important mark on modernist architecture, and won many prestigious prizes for his work. The Washington Post noted that he “created dozens of elegant, gleaming buildings around the world” and had an “ingenious ability to arrange windows and mirrors.” The New York Times called Birkerts an “innovative interpreter of the high Modernist style” who designed “ingenious, light-suffused interiors.”

I’m so pleased we have the opportunity today to honor this incredible man who exemplified the American spirit. He lived a long life, filled with great achievements and is a perfect example of how much the United States has benefitted from the contributions of immigrants. On behalf of the United States Embassy in Latvia, I would like to express my condolences to Mr. Birkerts’ family. It is fitting that as we gather today to honor the legacy of a great American-Latvian son, we do so in the very building he created. The Castle of Light in which we stand today, and Birkerts’ many other beautiful works will remain enduring symbols of the friendship and close ties between Latvia and the United States. Thank you.