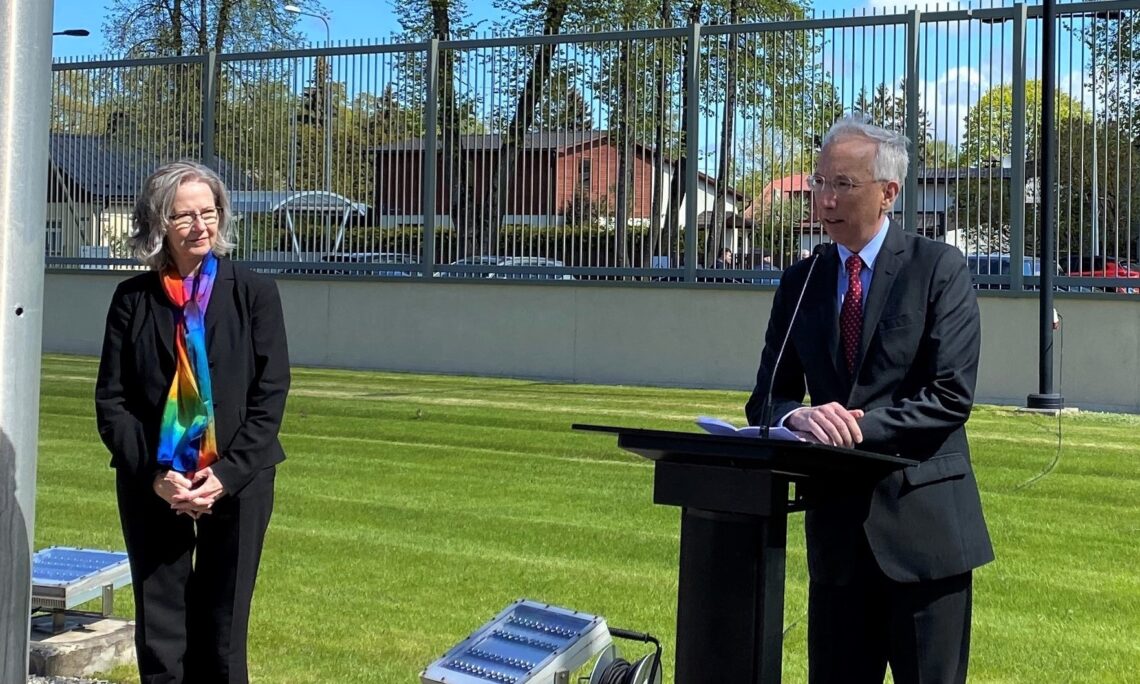 Riga, May 17, 2022 – To mark the International Day Against Homophobia, Transphobia, and Biphobia (IDAHOTB), the U.S. Embassy in Riga raised the rainbow flag today. Representatives from the Saeima, diplomatic community, and Latvian civil society joined Ambassador Carwile for the flag-raising ceremony.

“I am proud to continue the Embassy’s tradition of gathering allies and partners on this occasion to demonstrate our solidarity with lesbian, gay, bisexual, transgender, queer, and intersex individuals and to raise awareness of the challenges and struggles they face. In Latvia, in the United States, and around the globe, brave LGBTQI+ activists are fighting for equal protection under the law, freedom from violence, and recognition of their fundamental human rights,” said Ambassador Carwile.

“As we raise the Progress Pride flag today, let us not only reflect on how far we have come in the struggle for the human rights of LGBTQI+ persons, but also acknowledge the work that lies ahead. The LGBTQI+ community around the world continues to face discrimination, violence, and other forms of persecution because of who they are and whom they love. We must continue the fight for equality and inclusion, and we must continue it together,” said Ambassador Carwile.

In April, the U.S. government released its first-ever report on the implementation of President Biden’s Memorandum on Advancing the Human Rights of Lesbian, Gay, Bisexual, Transgender, Queer, and Intersex Persons Around the World. Secretary of State Antony Blinken said: “Our collective efforts drive toward the goal of ending violence and discrimination on the basis of sexual orientation, gender identity or expression, and sex characteristics. Equality and equity build stronger societies for all.”

(More information on the report: https://www.state.gov/lgbtqi-human-rights/)

IDAHOTB is observed internationally every year to counter homophobia and raise awareness of the human rights of LGBTQI+ people. Established in 2004, IDAHOTB is commemorated on May 17, the date when homosexuality was removed from the World Health Organization’s International Classification of Diseases in 1990. The day will be commemorated in nearly 90 countries this year.