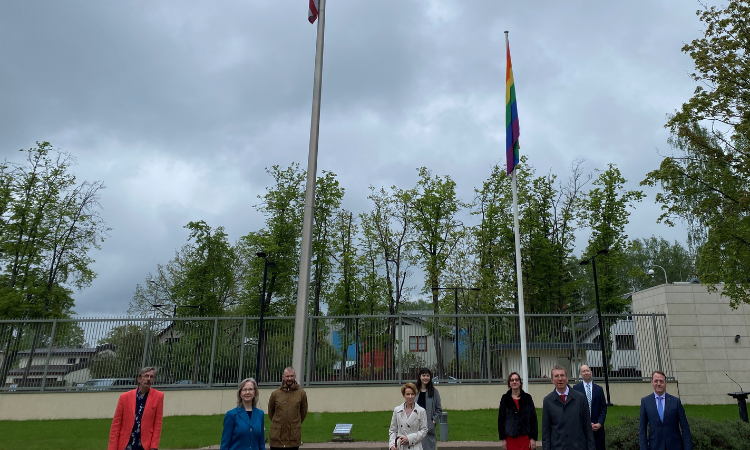 Riga, May 17, 2021 – To mark the International Day Against Homophobia, Transphobia, and Biphobia (IDAHOTB), the U.S. Embassy in Riga is flying the rainbow flag today. Minister of Foreign Affairs Edgars Rinkēvičs joined Chargé d’Affaires Ruta Elvikis for the small outdoor flag-raising ceremony, along with representatives from the Saeima, civil society, and the diplomatic community.

“The Biden Administration has made it clear that it will be the policy of the United States to pursue an end to violence and discrimination on the basis of sexual orientation, gender identity or expression, or sex characteristics, and to lead by the power of our example in the cause of advancing the human rights of lesbian, gay, bisexual, transgender, queer, and intersex (LGBTQI) persons around the world,” said Chargé d’Affaires Ruta Elvikis.

“We raised the rainbow flag today in support of the fundamental principle that all human beings should be treated with respect and dignity and should be able to live without fear no matter who they are or whom they love, said Elvikis.

IDAHOTB is observed internationally every year to counter homophobia and raise awareness of the human rights of LGBTQI people. Established in 2004, IDAHOTB is commemorated on May 17, the date when homosexuality was removed from the World Health Organization’s International Classification of Diseases in 1990. The day will be commemorated in nearly 90 countries this year.