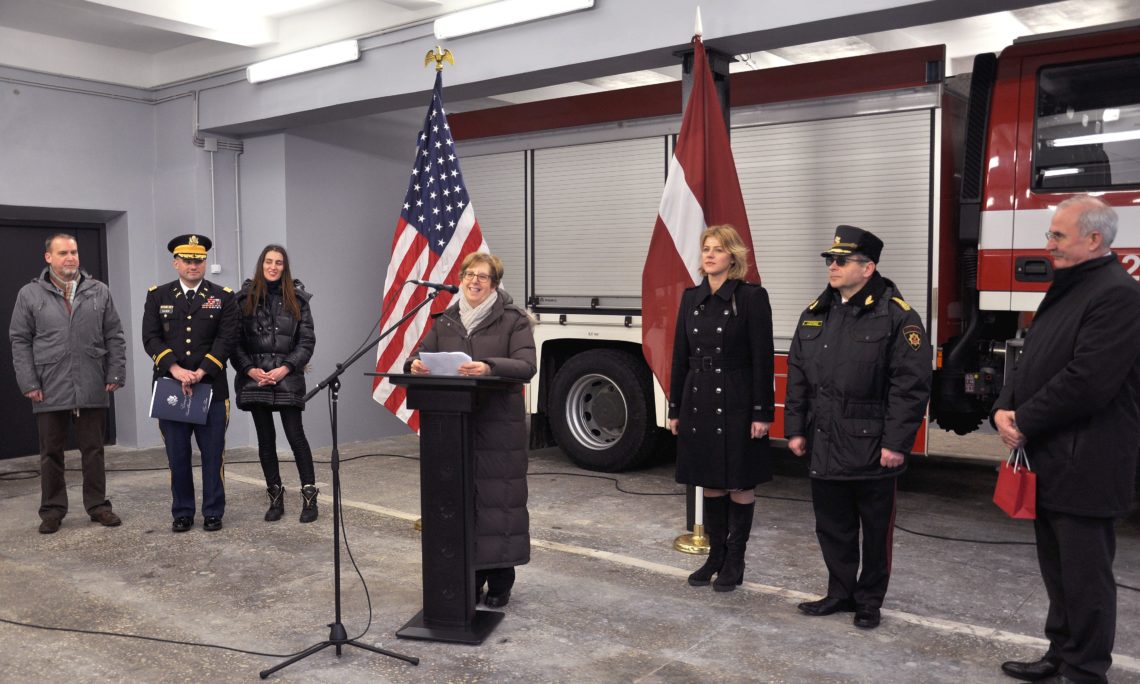 Riga, January 29, 2018 – U.S. Ambassador Nancy Pettit, Parliamentary Secretary of Ministry of Interior Evika Siliņa, Mayor of Jelgava Andris Rāviņš, representatives of State Fire and Rescue Service, and U.S. Army Corps of Engineers will participate in a ribbon-cutting ceremony to commemorate completion of the 12th cooperation project between the U.S. and the Latvian State Fire and Rescue Service (SFRS) on Wednesday, January 31 at 14:00.

The U.S. Embassy Office of Defense Cooperation (ODC Latvia) worked closely with the Latvian Ministry of Interior’s SFRS and the U.S. Army Corps of Engineers to implement the U.S. European Command Civic Engagement funded project of over $500,000.  The project was awarded to Latvian construction company “RCI Gulbene.”  This project entailed façade insulation and replacement of garage doors, windows, the roof, as well as installation of new ventilation, electrical and heating systems, minor cosmetic repairs in the garage, and renovation of maintenance and staff rooms.

SFRS’s Jelgava Division is co-located with Zemgale Regional Brigade and is the largest division in Zemgale region.  The Jelgava Division has a total of 94 employees and services an area of 1665.2 square km with an approximate population of 100,000 people.  The renovations will not only increase the energy efficiency of the building and improve the working conditions for the firefighters, but with new garage doors, it will help to decrease the response time to emergency calls.

The Jelgava Fire Station renovation project is the 12th fire station renovation implemented by the U.S. Embassy’s ODC Latvia, the U.S. Army Corps of Engineers and the Latvian SFRS.  Between 2009-2017, a total of 11 fire station renovations and construction projects were completed at Limbaži, Madona, Strenči, Gulbene, Valka, Aizkraukle, Līvāni, Ķeipene, Ventspils, Liepāja, and Valmiera fire stations.  These projects represent more than $3.5 million of investment in SFRS’s infrastructure.  One more project is in the construction phase – the renovation of the Jēkabpils Fire Station that will be finished in the spring of 2018.

In addition to the SFRS projects, ODC Latvia works closely with other governmental organizations such as the State Emergency Medical Service, regional municipalities, schools, senior citizen homes, and orphanages. Since 2007, ODC Latvia has completed more than 40 individual projects with more than $8.9M in direct investment to the local economy as a result of using local vendors.